I had the pleasure of hearing Scott Olrich, President of Marketing and Platform at Responsys, share his lessons learned during the past decade while at Responsys. Scott joined Responsys at a fledgling state, with under $20M of revenue and a growth trajectory that had hit the skids. A few months ago, Oracle acquired Responsys for $1.5 billion.

Here are the seven marketing lessons to building a $1.5B company.

Set an audacious vision.
When Olrich joined Responsys, many employees didn’t think that the company was anything more than an email provider. Olrich realized that they needed to think bigger and developed the concept of “Marketing Orchestration” that allowed marketers to view the customer journey in a mapped-out screen. In a multi-channel, digital-first world, having the one place that you go to coordinate activities and see the results across multiple efforts (of which email has remained an integral piece), Responsys became a must-have product for marketing teams.

Know where the budgeted dollars are today.
The audacious vision not withstanding, it was also important to recognize that 10 years ago, or even today, there is not a budgeted line item for “marketing orchestration” software. They went after existing budgets—in the email space, but also increasingly in the website verticals. The vision helped sell the product (“Heads of marketing are conductors!”) but the money came out of existing spend for things like email marketing.

Get the analysts behind you early.
In the B2B enterprise software industry, buyers have tended to gravitate toward third-party validators in order to make purchasing decisions. The Gartners and Forresters of the world still have an important role to play, and getting them behind you early to see that audacious vision of where the company—and the market—is going helps the analysts shape their view of the rapidly evolving markets that many software companies play in. Proactive outreach, getting them to understand the vision and specific case studies are the keys to the castle, said Olrich. To this day, Responsys remains a top darling of analysts.

Culture builders > Traditional managers.
Olrich felt passionately about the profile of who they hired.

“Always bet on high aptitude and culture fit vs. the right experience,” he said.

Many of the new hires in the sales organization (Olrich vehemently opposes the idea that sales and marketing are two different things: “If you don’t think marketing is trying to help sell, that’s a problem”) had a specific pedigree: recent grad from a top 20 college, played varsity sports and driven to succeed.

“You hire a guy who played soccer at Stanford and he loves it and then he tells the upcoming graduates to apply for a job. We ended up having a lot of lacrosse guys because of that type of referral—and they were star performers.”

Creating reps > Hiring reps.
Responsys had both inside and outside sales reps, with outside reps tending to be more experienced and more highly compensated. Rather than trying to recruit outside reps Responsys created a training program that provided an 18-month pathway to getting promoted from the internal BDR role to an outside sales rep.

“Lateral hires of outside reps are a mixed bag,” Olrich said. “They are expensive, not always the top performer (since they are on the market) and they can take a while to teach how to sell your product.”

The internal promotion strategy removed those worries from the table while also giving new recruits a clear path to a $200,000 OTE before they were 25 years old. Training programs were online and self-paced, and included: managing constructive tension, teaching for differentiation, negotiation, storytelling and ROI modeling.

Challengers > Relationship builders.
Olrich was using the challenger sales methodology long before Dixon and Adamson published “The Challenger Sale” in 2011.

“I was mad when that book came out, because if everyone sells like we can’t gain an unfair advantage in our sales methodology,” said Olrich.

Olrich said that their reps always sold against the status quo and made prospects acknowledge their problem with maintaining that status quo before giving them an idea of where that vision of solving the solution could be. The prospect is uncomfortable not knowing how to solve the problem and they attach to the vision for the solution. Now you provide the solution itself.

Internal marketing  is more important than outside marketing.
Perhaps the most interesting point that Olrich made had to do with the importance of frequently communicating to the internal team. Not only was there a consistency of message factor, but internal emails highlighted how the culture was helping the company grow.

That’s all the pearls of wisdom that I have to share from Scott Olrich. Now I’m going to go email the company an update on marketing initiatives! 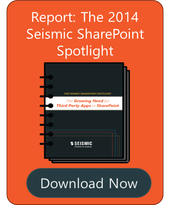