The recent news of the Apple – IBM partnership is encouraging but slightly anticlimactic because it feels like it’s two years overdue. Considering the fact that most CIOs made large iPad purchases in the first 18 months of the iPad’s unveiling, and that, over four years and four generations of iPad later, we’re still talking about enterprise security and functionality, it’s about time that Apple made a serious overture to its enterprise customers.

Likewise, IBM has lived in the enterprise data business without a formal partnership with the hardware manufacturers of the end-point of data creation and consumption—businesspeople using smartphones and tablets.

Charles King, Pund-IT principal analyst, wrote in a review of the deal:

“[Apple’s and IBM’s] widely divergent paths have rejoined for a pair of fairly simple reasons: 1) IBM firmly understands the growing, critical importance of mobile endpoint devices, but the company’s back-end-focused strategy lacked a critical conduit into end users, and 2) While iPhones and iPads are wildly popular among consumers, including those involved in workplace BYOD programs, Apple has failed to craft a workable, convincing strategy for enterprise customers and markets. With that context, how does the new partnership between IBM and Apple look? Pretty impressive, overall.”

In general I have a healthy skepticism of joint press releases by large companies because they tend to be more style than substance. But it’s hard to not get excited about this deal for a few reasons:

1. The enterprise adoption of tablets and other mobile devices isn’t a fad.
2. Adoption of new processes to conduct business in a mobilze world have fundamentally altered the way that enterprises communicate internally and externally
3.Cloud technologies meet and will continue to meet the security demands of IT departments

As this partnership rolls forward, it will be interesting to note which enterprise-specific apps IBM will develop with its vertical-focused mandate, and whether there will be any acquisition activity to supplement such an effort.

The big winners in all of this, of course, are enterprises that moved quickly to adopt a mobile strategy—particularly the CIOs that made iPad purchases before the business had figured out how to make the hardware useful.

Now the onus of fulfilling the ROI of a mobile strategy is on the head of sales, as reps carry sleek and secure iPads into meetings with prospects and customers. How does that iPad improve the customer experience? Maybe IBM will help Apple solve that question, but their announcement seems to be more about turning back-end data into information rather than altering the one-on-one interaction of a sales rep. 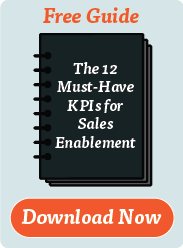